The list of the World’s 50 Best Restaurants is one of those things I read every year, think “wow” I’d really like to eat at some of these, and then move on because I know I don’t have $300+ to blow on one meal, even if it will be the best meal of my life. I mean it would have to be the best meal of my life because I probably wouldn’t be able to afford to eat for a month afterwards and the memory of that meal would have to be enough to sustain me.

The one exception to this is Pujol, Enrique Olvera’s “Mexican reinvention” style joint in Mexico City, ranked #20 on the list. At 1,325 Mexican pesos ( approx. $86, £58) for a 7 course set menu, this is easily one of the most affordable places on the entire list.

Widely considered the country’s best restaurant, Pujol is chef Olvera’s personal approach to Mexican gastronomy. He has taken his country’s cuisine and both reinvented it by recreating historic dishes and moved it forward by creating new ones. 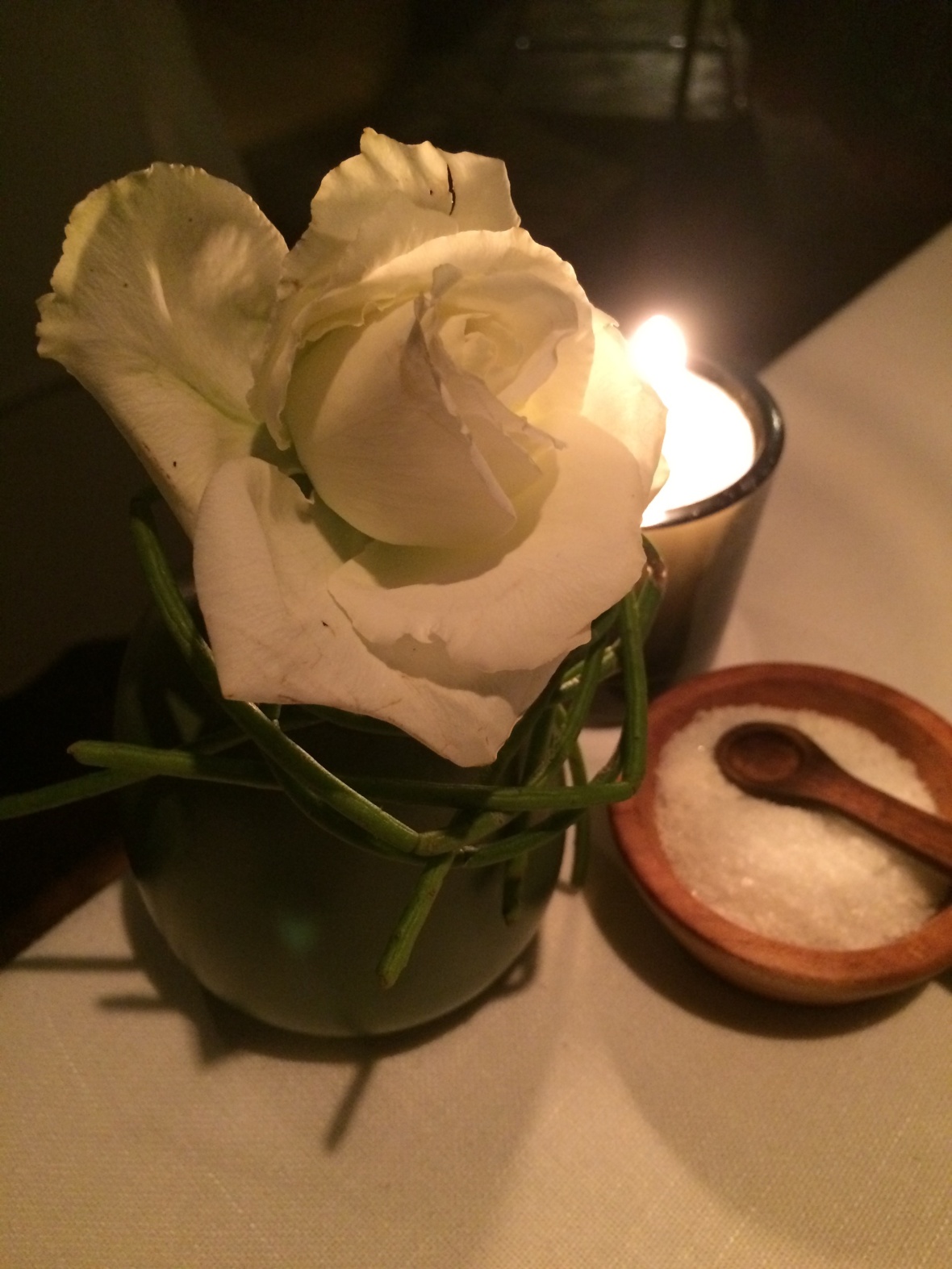 The restaurant boasts an extensive liquor menu with countless options for cocktails, mezcals, tequila and Mexican cervezas. The Carajillo with Licor 43 and café espresso was just the luxurious beverage I was after to start my holiday off right. Similar to Italy’s caffè corretto “corrected coffee,” the Carajillo can be served hot or cold, over ice, as pictured here. 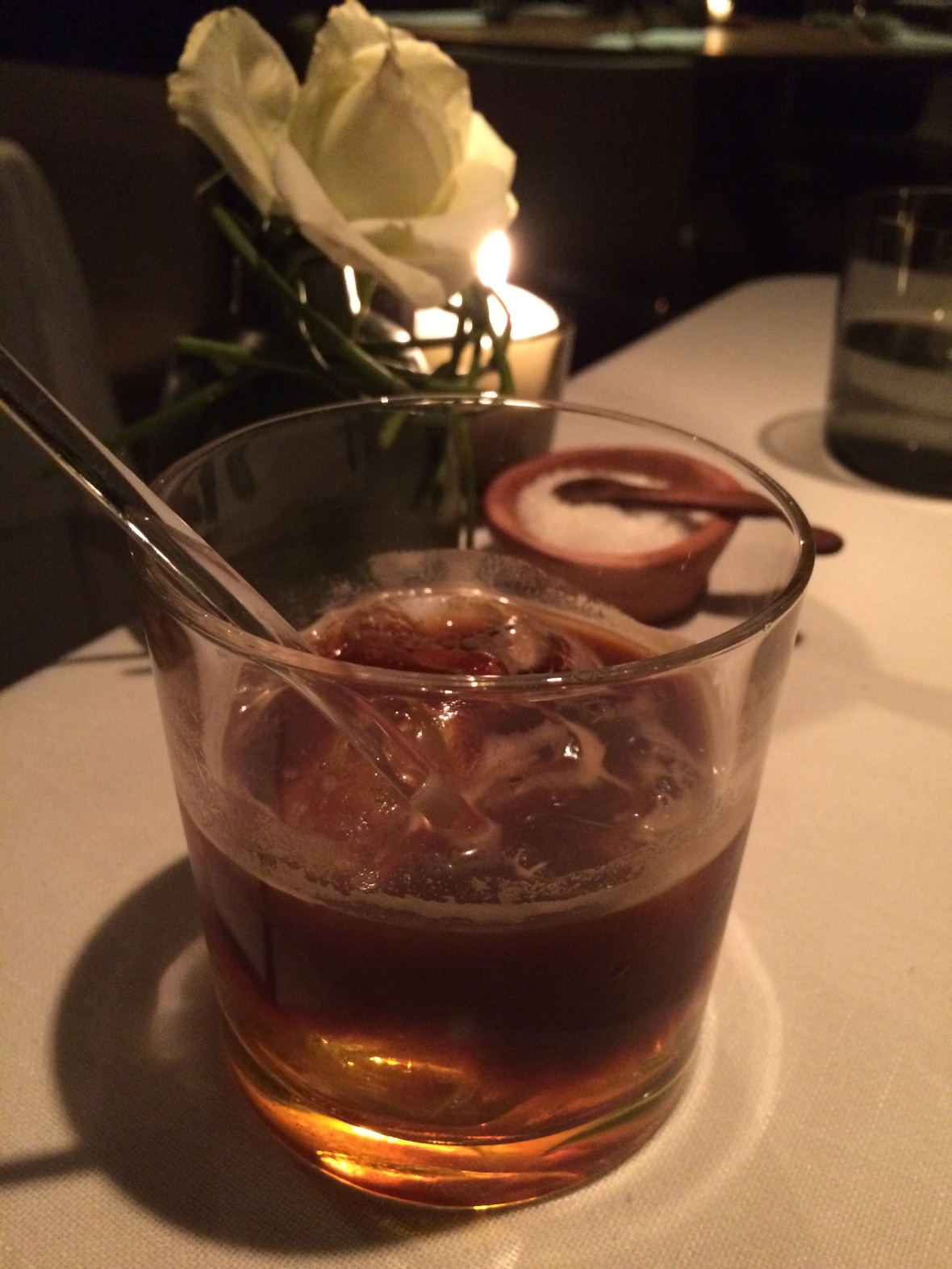 The first course consists of botanas, Mexican street snacks. This where Olvera starts displaying his brilliance, with his take on Elote, a popular Mexican street food. This is truly the star of the night. A canapé of skewered charred baby corn cobs, presented in a hollowed-out pumpkin with the smoke from burnt corn leaves protruding as it arrives at the table, the corn is dipped in a coffee-flavoured mayonnaise and chicatana ants, which have been roasted to a crisp and crushed into a powder. 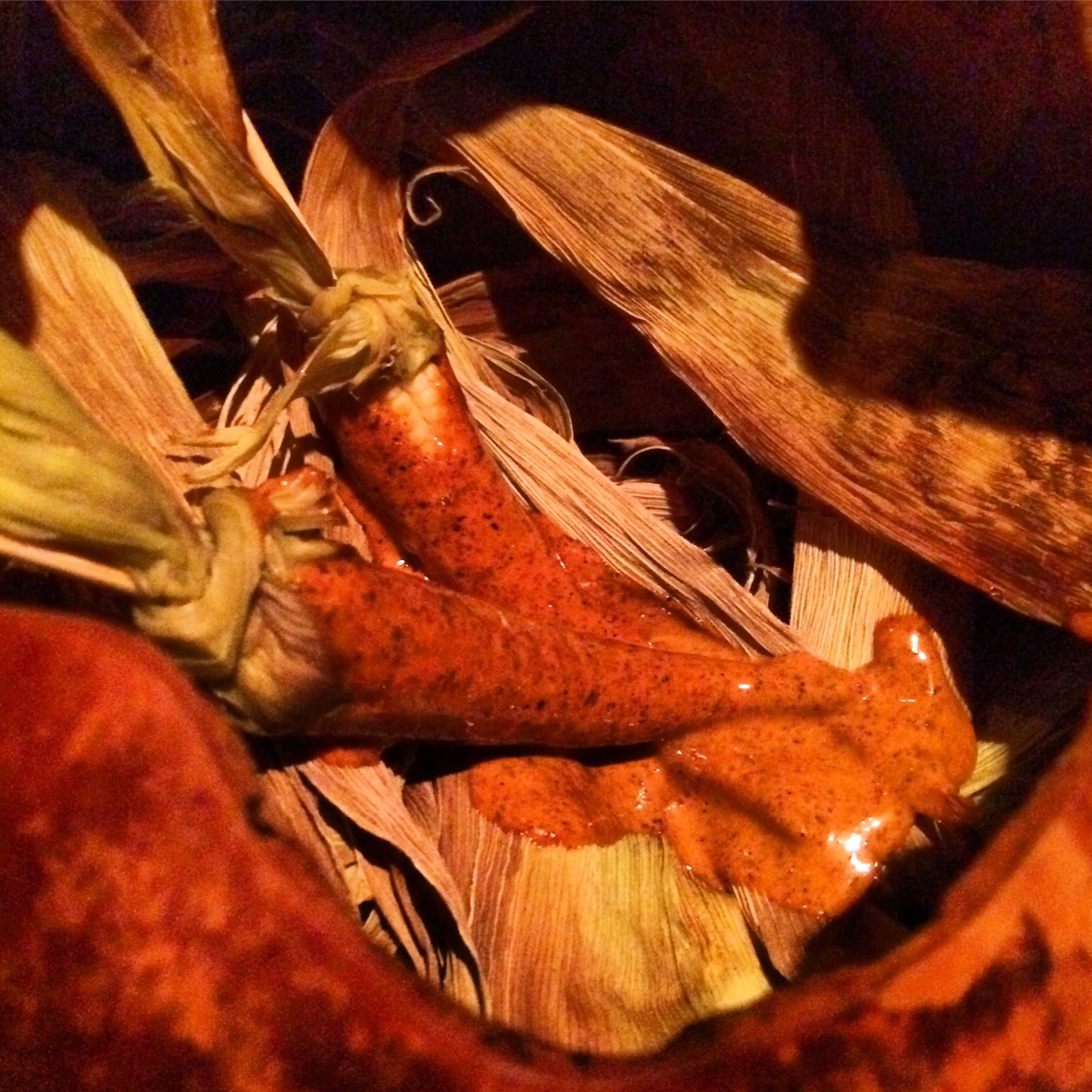 The other botanas consist of bocol huasteco, a type of mini round thick corn cake cooked on a griddle, typical of the region Huasteca, cucurbitas, fruits in the squash and pumpkin family, and sunchoke with xikil-pak, a type of pumpkinseed from the Yucatan. 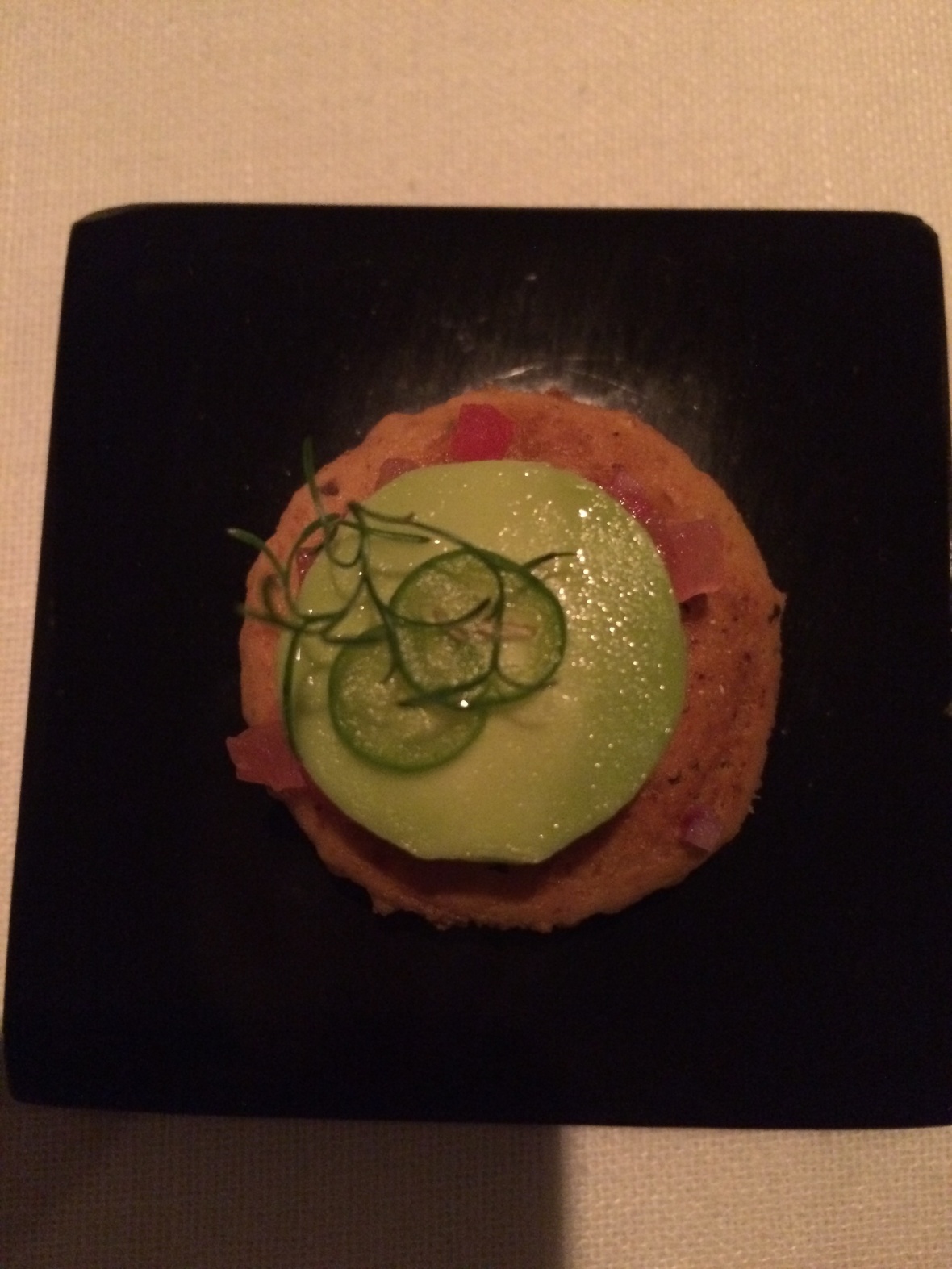 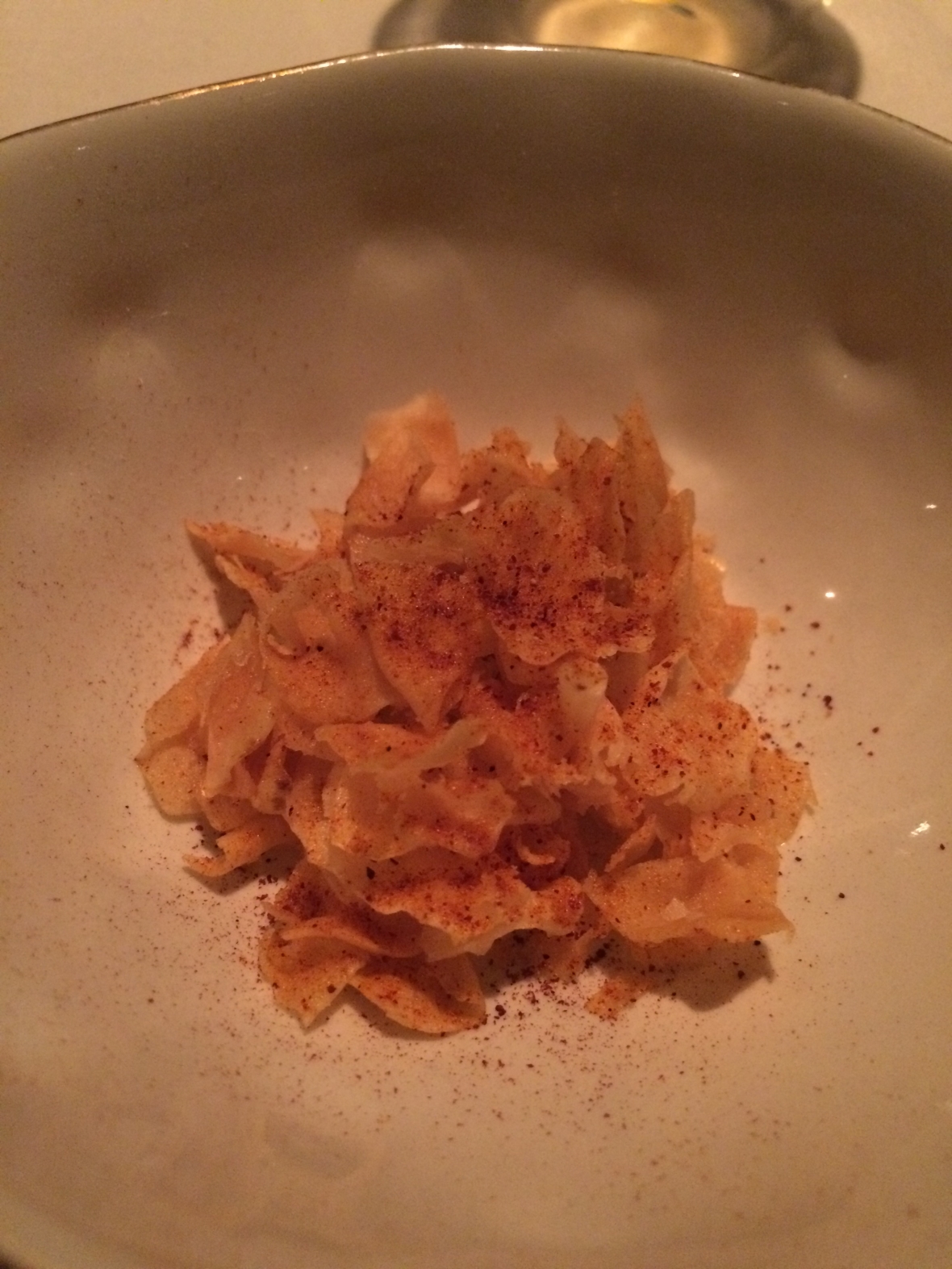 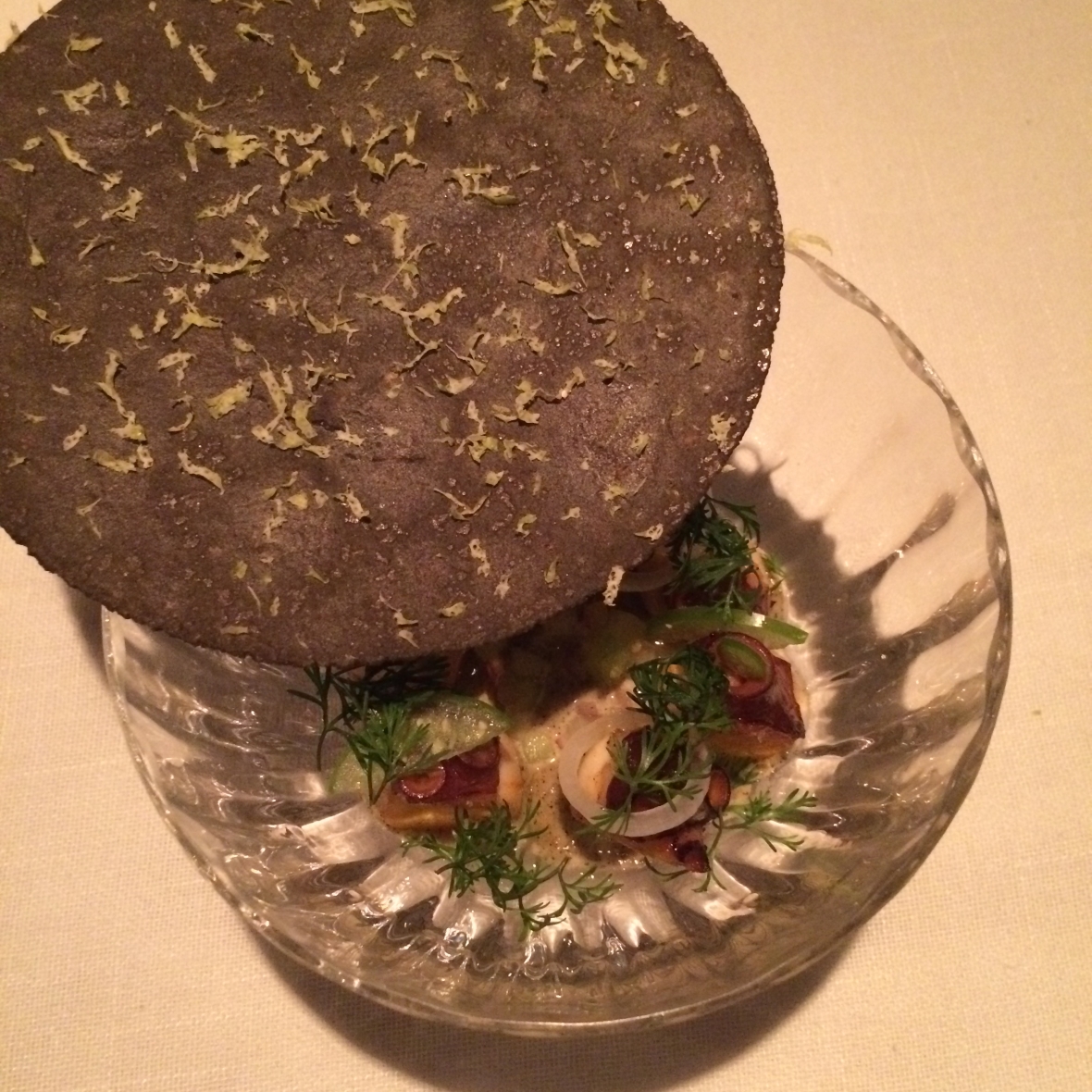 The crudo is an unexpected second course. I also thought that crudo was a Mexican slang term for hangover. I have no idea why that has any relevance but I’m just putting it out there. 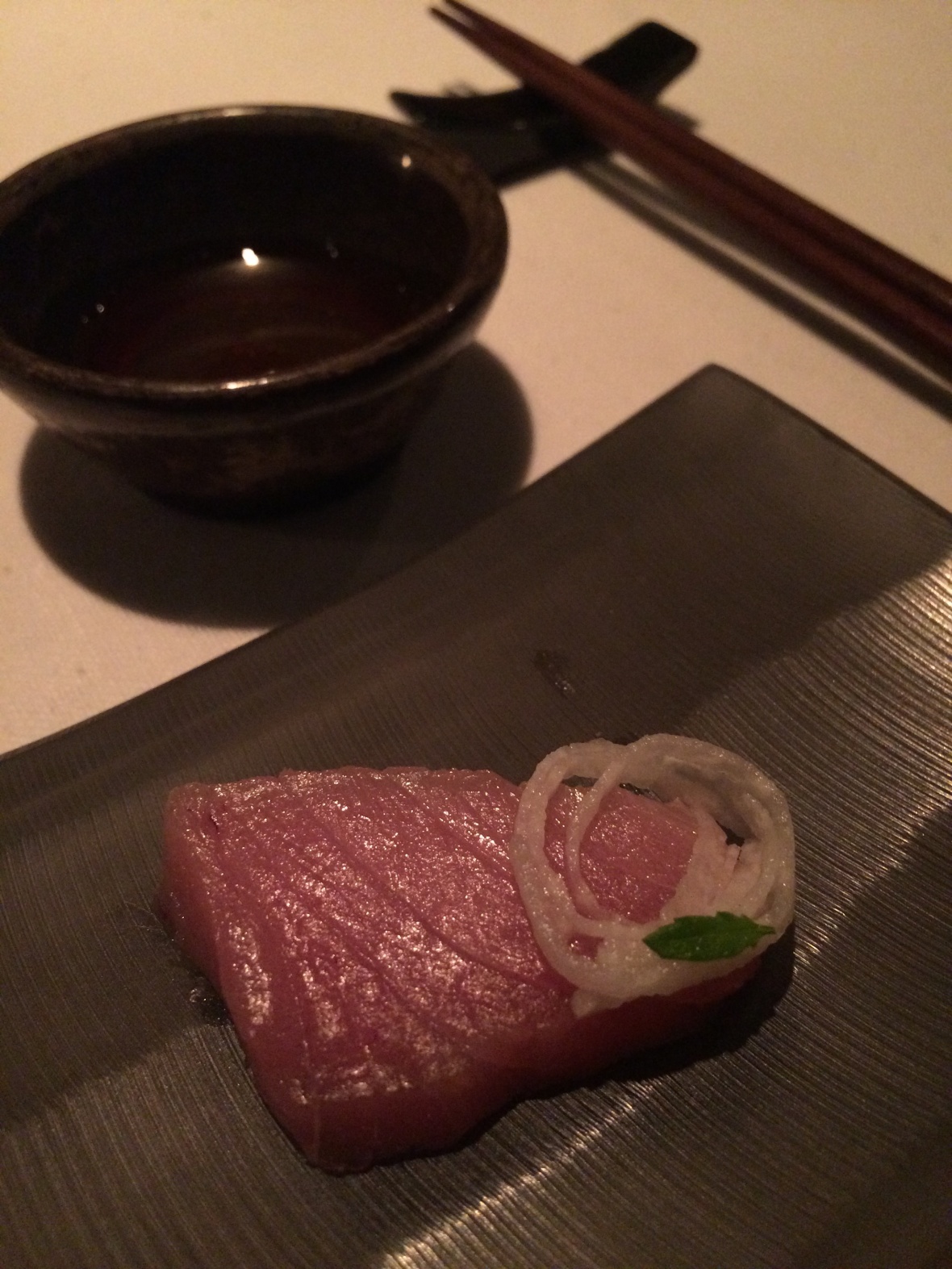 Third course is mole amarillo with eggplant, calabasa, and huaje, a type of gourd. 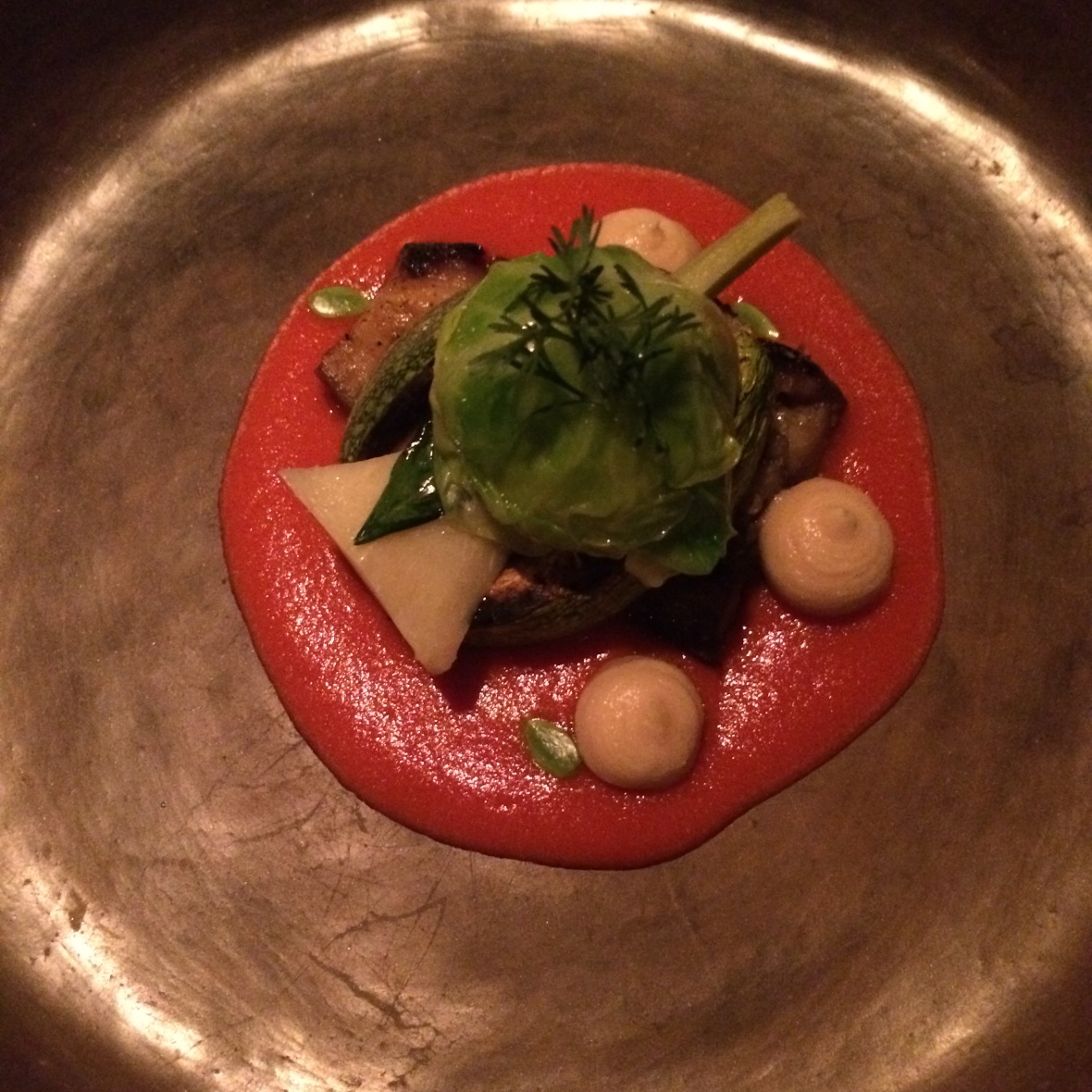 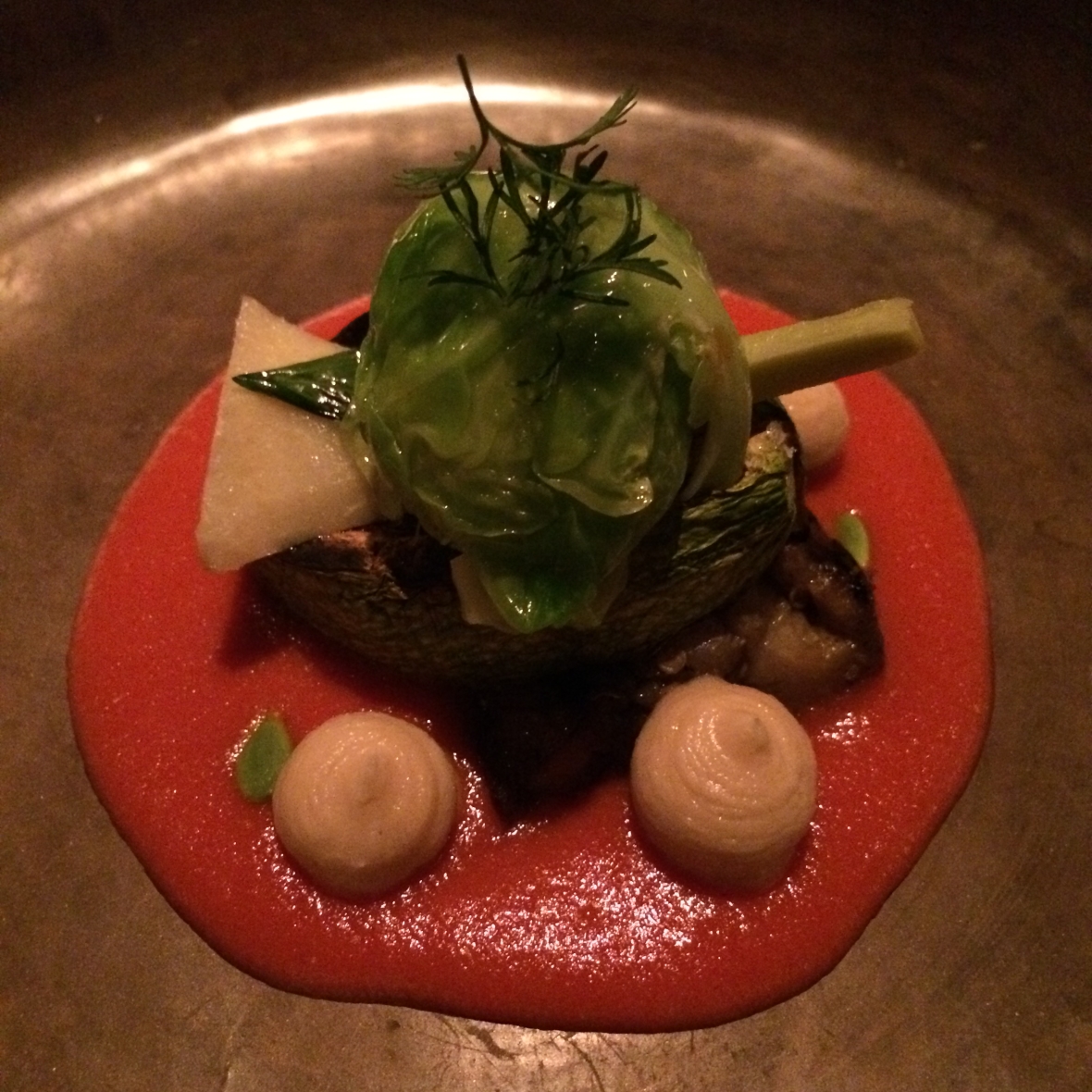 Other dishes are deconstructed and an apparent flauta, taco or tamale may not be quite what it seems. You get a choice with the fourth course and I wisely selected the lamb barbacoa taco with avocado leaf adobo and avocado puree. 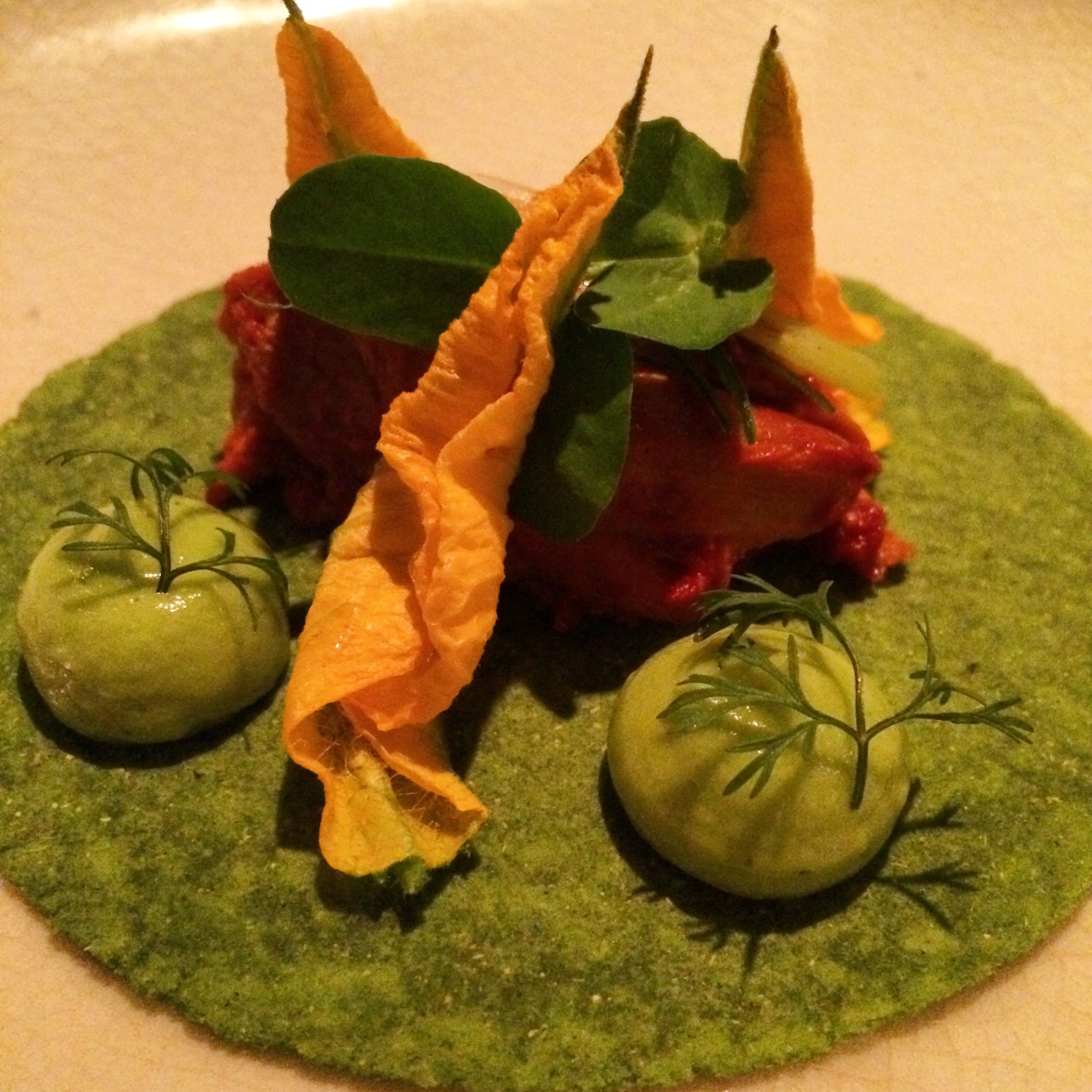 The pork with kumquats, cactus, radish, and potato pickle was packed with flavor and the roast pork perfectly juicy. 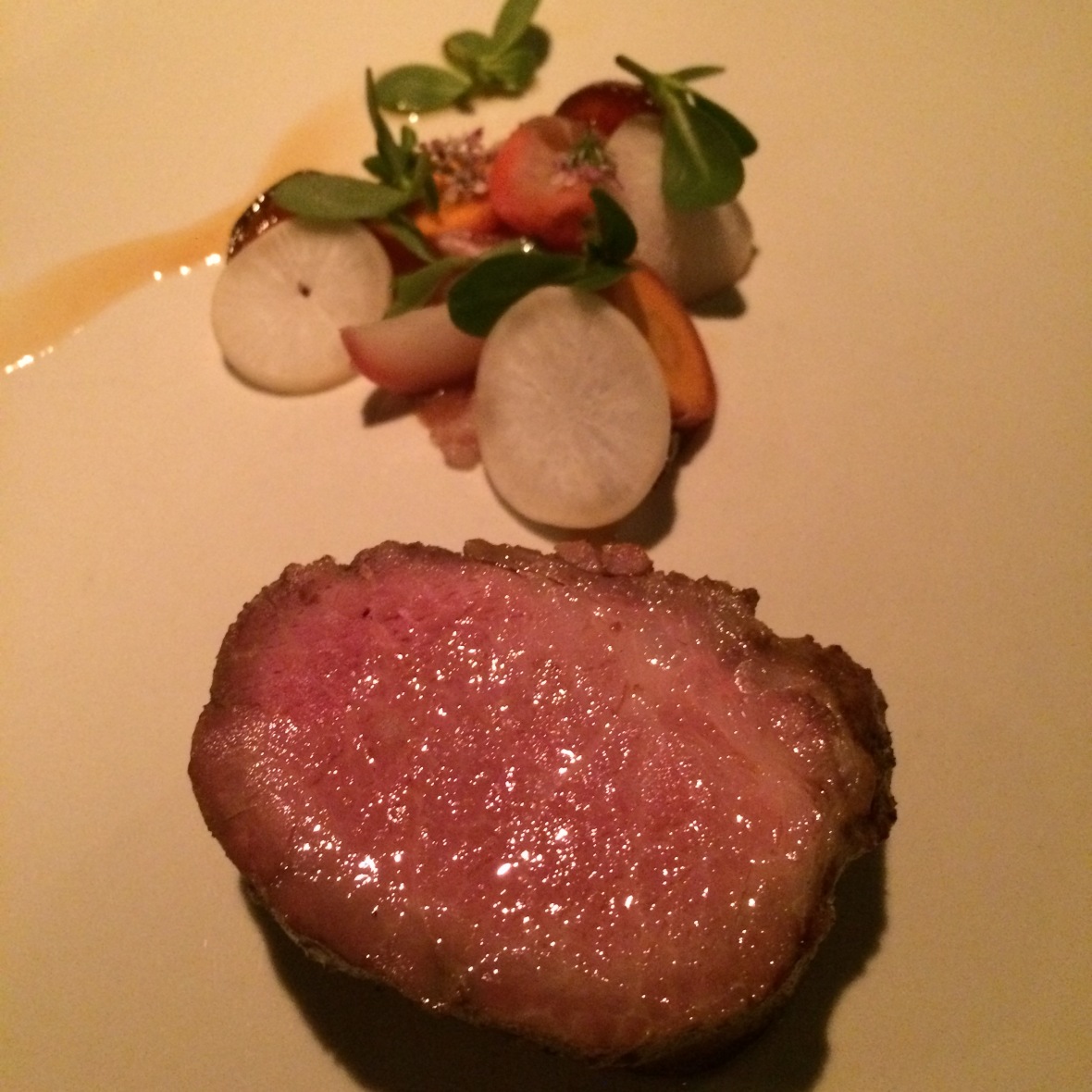 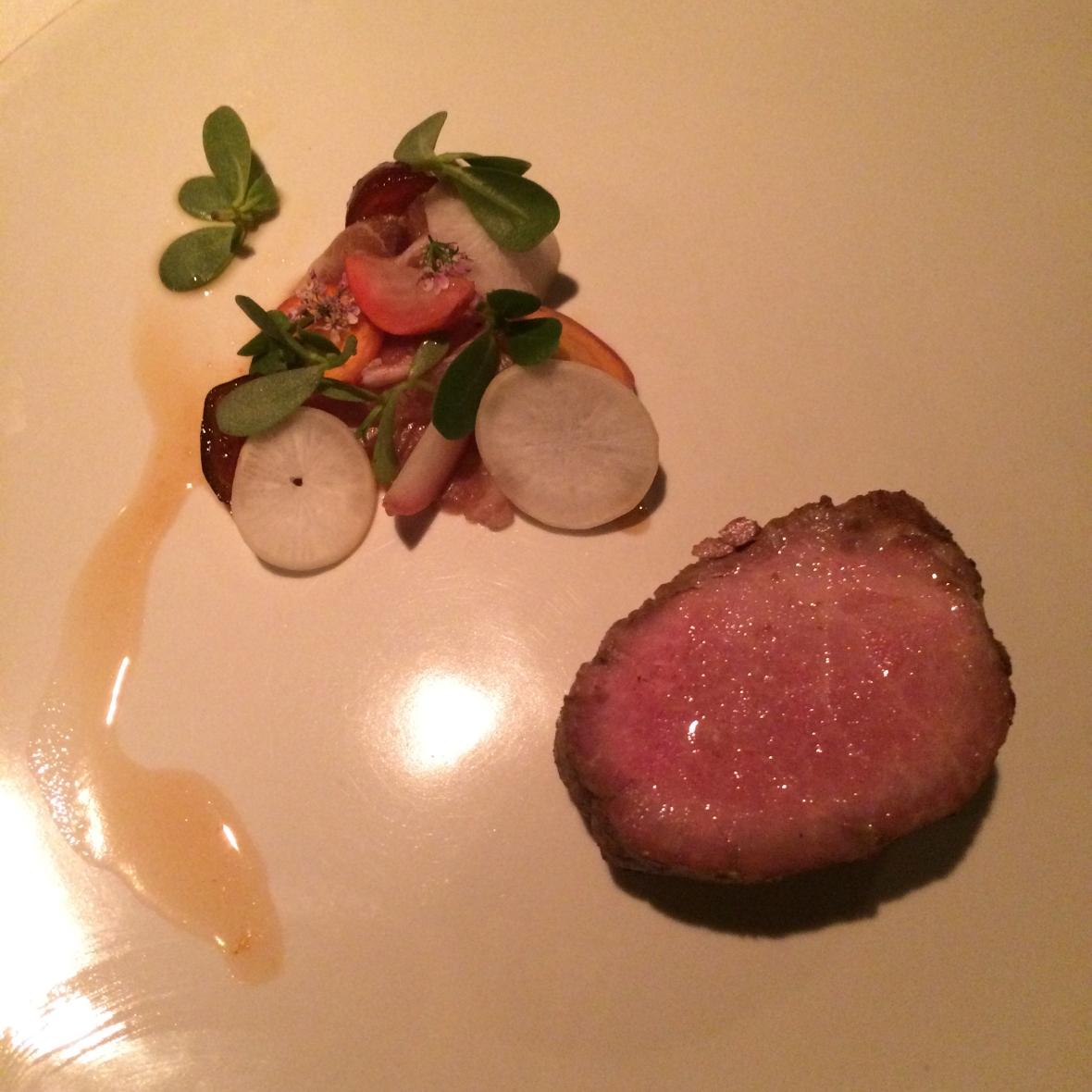 Course six is when things started to get a bit hairy. Not literally but.. let’s talk about the mole madre, mole nuevo. Now mole is something steeped in Mexican history — it comes in various flavors and ingredients, with chili peppers as the common factor, and three cities still argue to this day over which is the founder and originator of mole. The classic mole version is the variety called mole poblano, which is a dark red or brown sauce served over meat. So, you can imagine my surprise when the mole comes served, after the main courses, and by itself on a plate, a circle of dark, rich brown engulfing the light center. 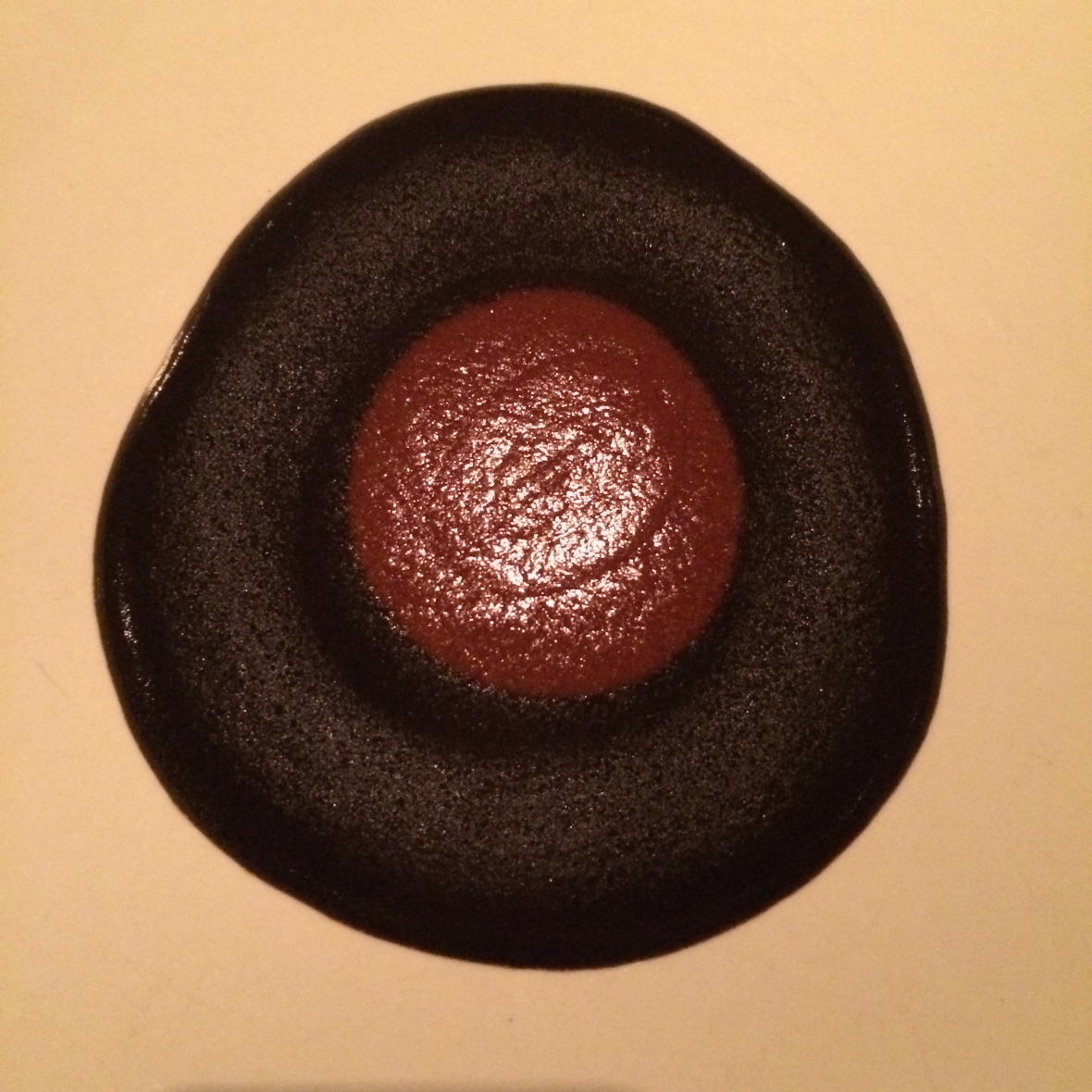 According to Olvera, the mole changes on its own, due to the seasons or other factors. Sometimes in the restaurant they add macadamias, sometimes almonds, or even a dash of tamarind. A traditional mole recipe will call for local and seasonal ingredients, but because people don’t tend to add new mole to their old mole, this one is truly unique. I can’t say I was particularly fond of this dish, perhaps I wasn’t used to it, but I respect that the mole I tried on this particular day, the 17th February 2015, will never be the same as the mole on any other day.

The seventh and final course titled “Final Feliz” comprises a pastelito de chocolate negro y plátano, a tiny dark chocolate cake with banana filling and a helado de lichi con sopa de coco, con un toque de gengibre, lychee ice cream with a coconut ‘soup’ with a touch of ginger. The form of both the plate and its contents were a visual echo of the huevo escondido. There were also Crujiente de manzana con crema de canela, crisp apple slices with cinnamon cream, which very convincingly looked like banana chips but alas indeed they were apples. 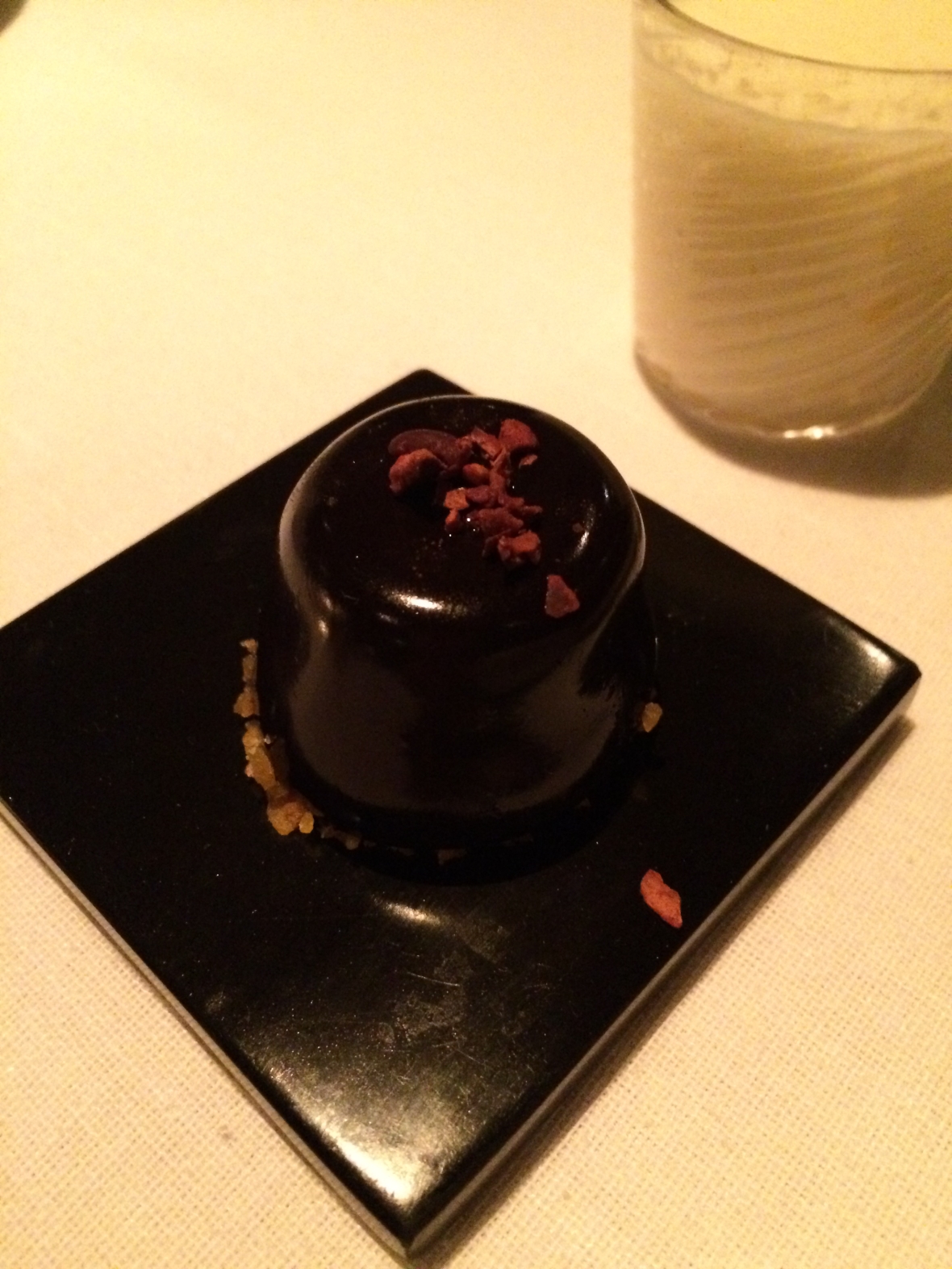 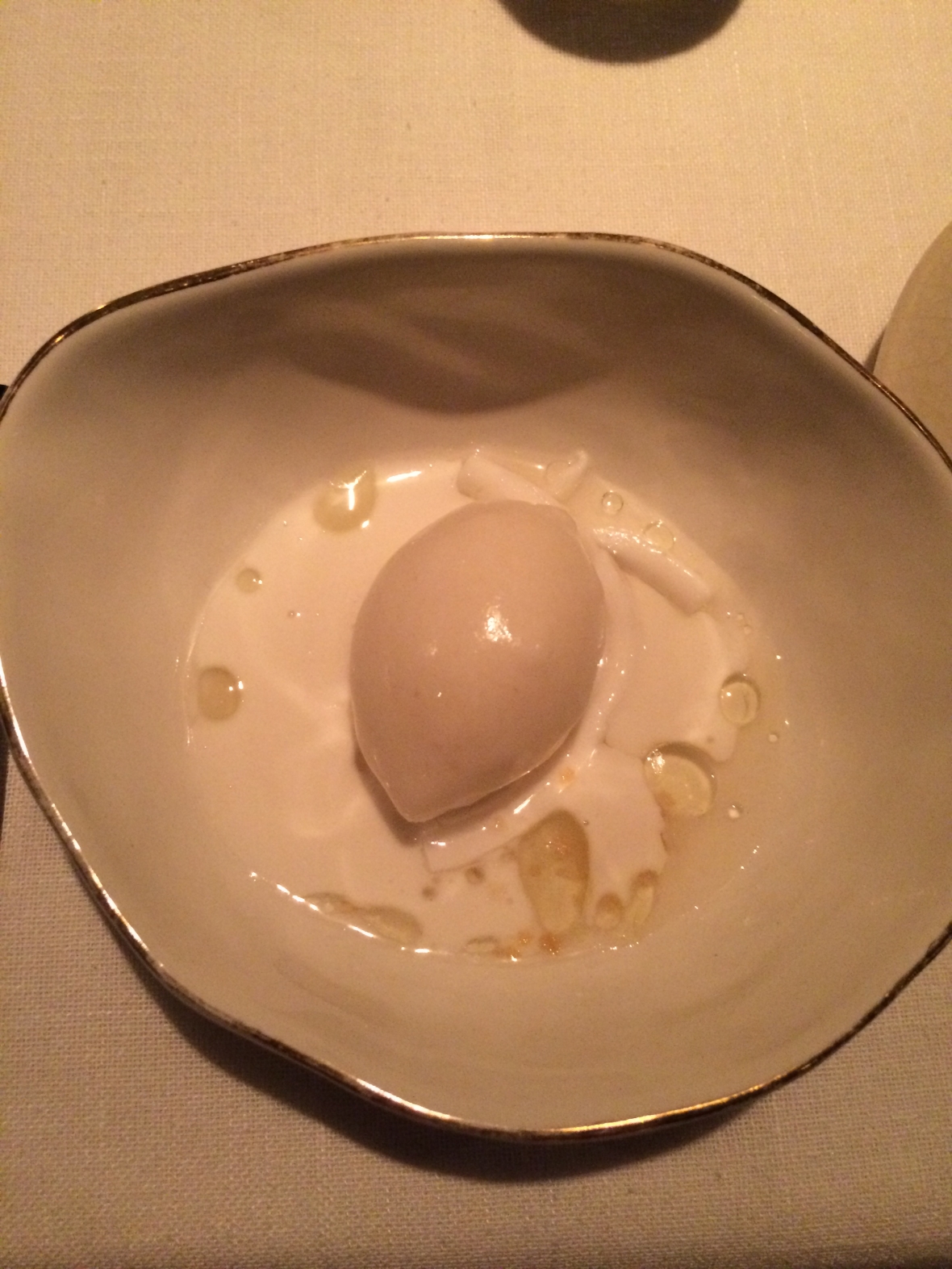 Pujol definitely screams high quality but it is a humble place as well. Service is calm, quiet and informed, as the food can more than speak for itself. I would both recommend and return, should I ever find myself in Mexico City again. Hasta la próxima vez.