Having been singled out by the creator of this lovely ‘restaurant tube map’ as the best of the best in Pimlico, I felt a little guilty about not having gone to this restaurant seeing as I have been living in the area for over a year. 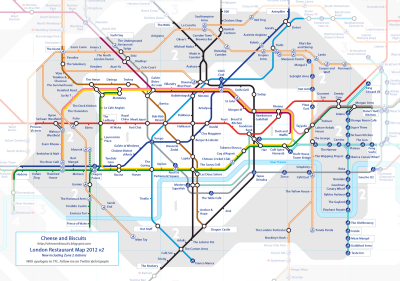 So I went to Tinello over the Easter weekend and I’m going to apologize in advance – I was so distracted by the greatness of the food that I did something very unlike the Rav B – I forgot to take pictures of the food. I know, it’s bad. I’ll just have to go back.

Firstly, a little background on Tinello I gathered from my research post-meal: Tinello opened in August 2010 and is the product of Federico Sali, a Florentine former employee of Locatelli, and his sommelier brother Max.

Based on the little I know, I think Federico and Max should always, always work together. They produce culinary wonders.

The restaurant felt slightly formal at first but perhaps that was owing to the fact that it was quite empty when we first arrived and all the waiters were on hand staring at the door as if waiting to go into battle. I would have preferred a little background music but as the evening wore on and the restaurant filled up a bit, it became a more relaxing, comfortable environment. The best part of the restaurant’s décor is the bare red brick all along one wall. It gave off a rustic, yet modern vibe at the same time.

The menu is pretty serious stuff – it took me about 20 minutes to decide what I was going to order.

I settled on one of the ‘Small Eats’ for a starter, the gnocco fritto e lardo di colonnata (deep fried bread dough and ‘lardo’). The Italian wording sounds nicer than saying ‘Yeah I ate some lard and it was pretty tasty’. The deep fried bread dough was actually little triangles of hot dough, airy on the inside and crisp on the outside. The bread dough was a perfect compliment to the smooth lardon which melted in your mouth it was so creamy and light. Lou, also known as ‘The Saucy Swine” on this blog, ordered the prosciutto toscano, Tuscan ham, which was also perfect salty, meaty goodness. It left me satisfied yet still hungry for more food now that I had been given a sneak preview of just what these chefs could concoct, which is exactly how one should be feeling after Antipasti or small eats to start.

For the pasta dish, I ordered ravioli di guancia di maiale brasata (braised pork cheek ravioli). The pasta was one of the freshest I had ever tasted and the pork meat was so tender and juicy – absolutely mouthwatering. Lou ordered the gnocchie di ricotta, salsa di spinaci e scaglie di parmigiano (homemade ricotta dumplings, spinach sauce and parmesan cheese). Now in my post about Greenwich market, I’d already expressed my dumpling fetish, so when Lou said ‘Erica, you HAVE to try this,’ well, there was no way I was going to refuse. And the ricotta dumplings were simply divine. The cheese and pasta were just so fresh, it’s one of those things you just need to try for yourself. The whole evening was pretty much a repeated chant of ‘Oh my god this is so good. No, but really this is REALLY good,’ intermixed with some other chatter and gossip.

This was all paired nicely with the cheapest bottle of wine on the menu (don’t judge – we’re both broke but we like fine dining!) which was the Arpeggio Bianco, for only £14.50 a bottle, was quite a steal. This would also be a good time to point out that Lou convinced me to get a Bellini at the start of the meal, which, only after we received the bill, realized they were £10 each. Way to go Lou.

Too full and broke for dessert, we asked for the bill and received some lovely complimentary little cakelets filled with delicious cold cream which ended the meal perfectly. I almost didn’t care that I spent £40.

If the place wasn’t so pricey, i.e. if I had a normal stomach capacity that was satisfied by little quantities of food and I didnt feel the need to order multiple things from the menu, this would hands down be my go-to Italian. But, it will remain a special place to go to if someone (with money) visits me. Just kidding. Sort of.

All in all, amazing meal. I’ve been thinking about it ever since – especially the tasty lardo.