I refuse to start another restaurant review on a negative note or a rant. So, I will avoid discussing the fact that this is yet another ‘no reservations’ establishment. To be fair, they do apologize on their website for this fact by saying ‘We’re not trying to be cool but…’ I’d replace the word ‘cool’ with ‘muppets’ in this case, but that’s merely personal opinion.

Pitt Cue co spent the summer of 2011 serving superlative US-inspired dishes such as pulled pork, ribs and smoked brisket from a van before owners Tom Adams and Jamie Berger moved into the most insanely tiny venue in Soho’s backstreets in 2012.

BBQ is something Americans, particularly southerners, hold near and dear to their hearts and it’s very easy for people to screw it up. There are few ‘true blue’ BBQ joints in London – the best seem to be food vendors, such as the Rib Man, but few dare to try and actually make a go of it in a bricks and mortar establishment. We’ve got Bodean’s in Soho which is simply OK but where are the places to give the American South a run for its money? Pitt Cue has made a go of it and I’m pleased to say they haven’t entirely screwed up! 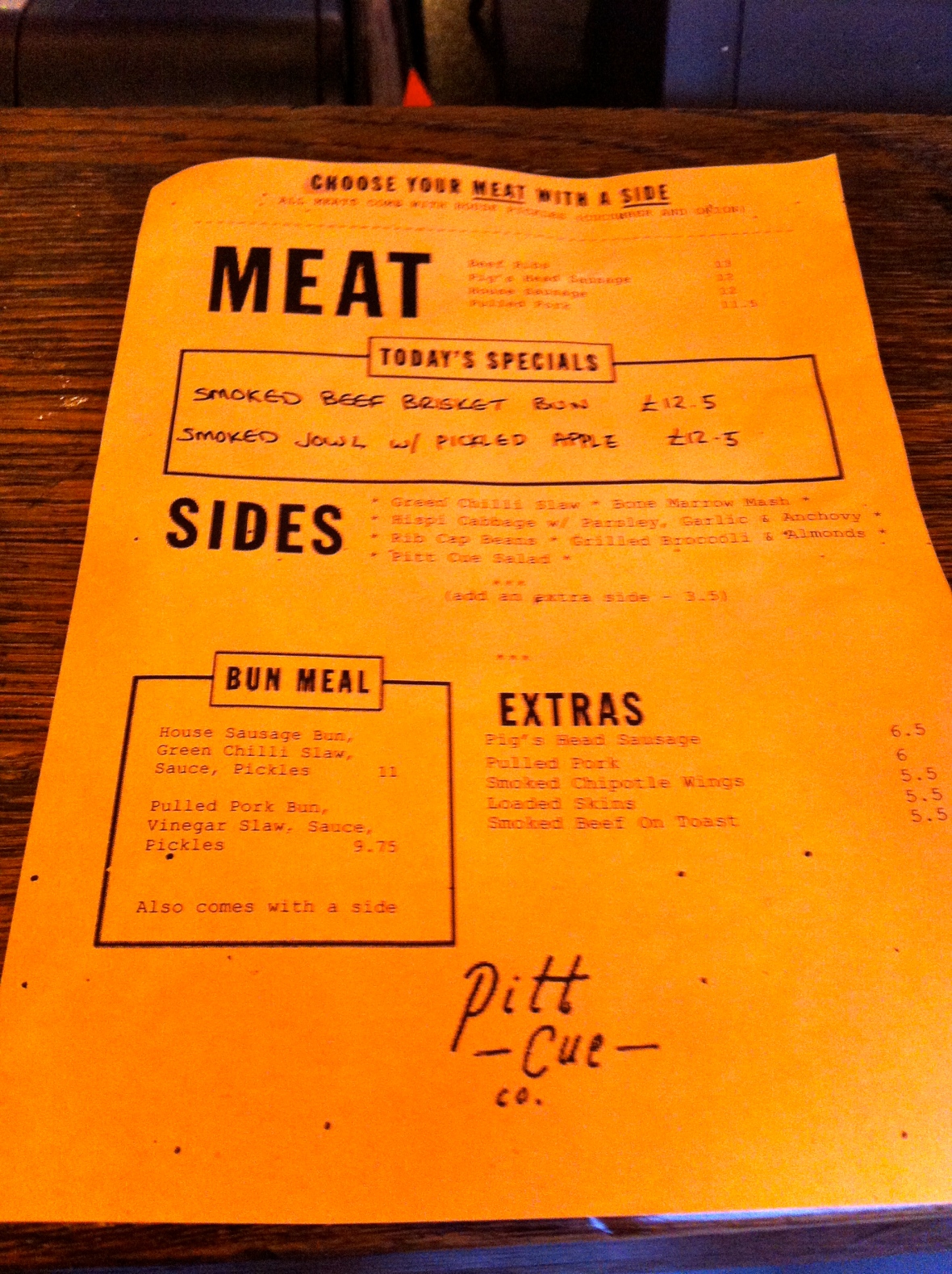 Queues start early as the hordes move from their offices around Soho to this spartan basement dining room of a restaurant. I arrived spot on at 6:30 on Friday (bad judgment call on my part) and was seated with a friend an hour and a half later. The bar provides an opportunity to sip on an array of whiskey cocktails, bourbon-laced sours and an assortment of ales and lagers. You will also get a friendly little pig figurine to hold onto when you open up a tab. It’s the little things right. 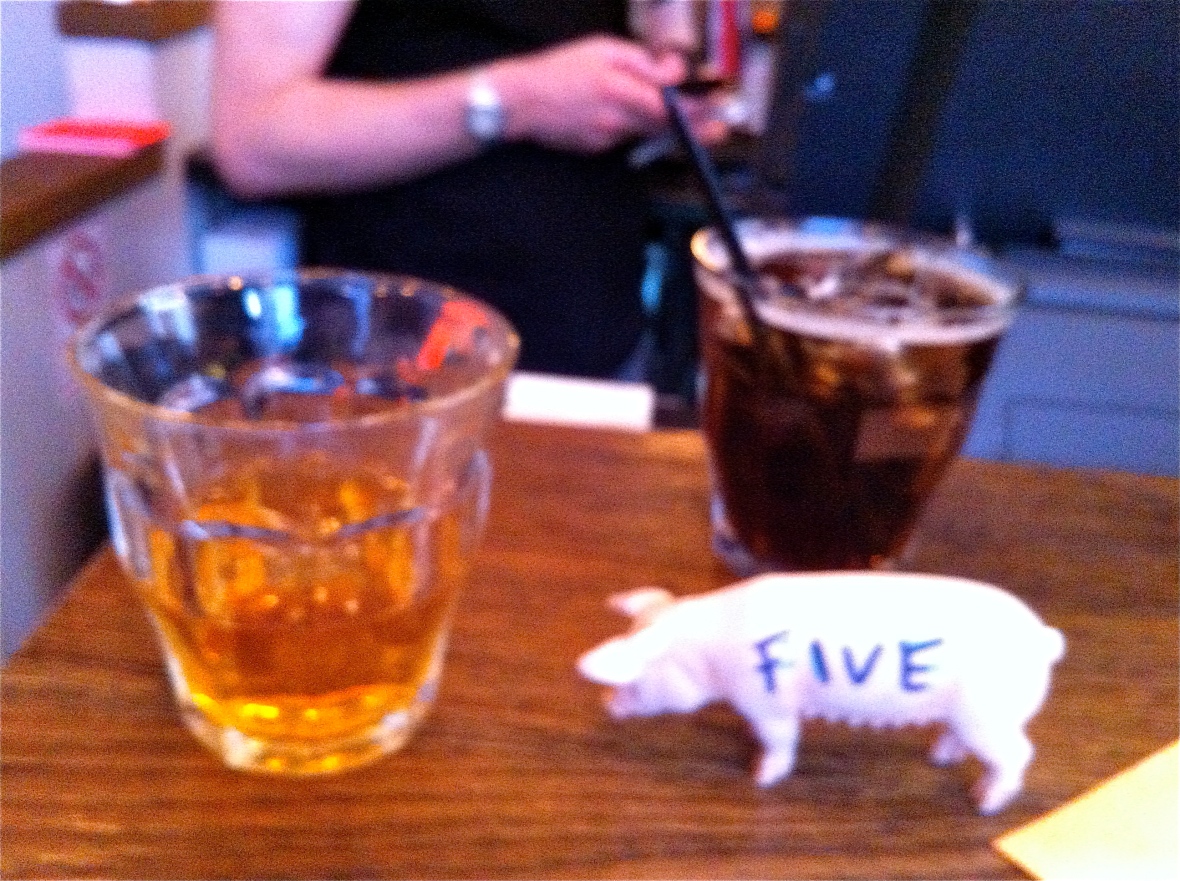 My friend and I opted to wait for one of the basement dining room tables, passing up on a seat at the one of the tables upstairs across the bar. Once again, when I say table, I mean narrow wood slab. I thought at the time that holding out for a ‘real’ table downstairs was completely justified as I had been queing so long. To be honest, I should have gone with the table upstairs – at least then I would have been somewhat removed from fellow diners as opposed to feeling like I was third wheeling on the couple’s date downstairs.

The dining room (did I say dining room? I mean basement) only has space for about 20 people so if you don’t want to queue, avoid the busiest times!

The food is served on nice little prison trays – good for imagining what life would be like eating as a convicted felon. If society served convicted felons really good pulled pork obviously. Between the cramped accommodation and tray food.. it really wasn’t a far-fetched thought..

I was pretty disappointed in the ribs – for meat that is dry rubbed with such supposed care, I expected tender juicy meat falling off the bone. I didn’t feel like it was so much falling off the bone as I was aggressively tearing it off. The meat was definitely more dry than it was succulent. 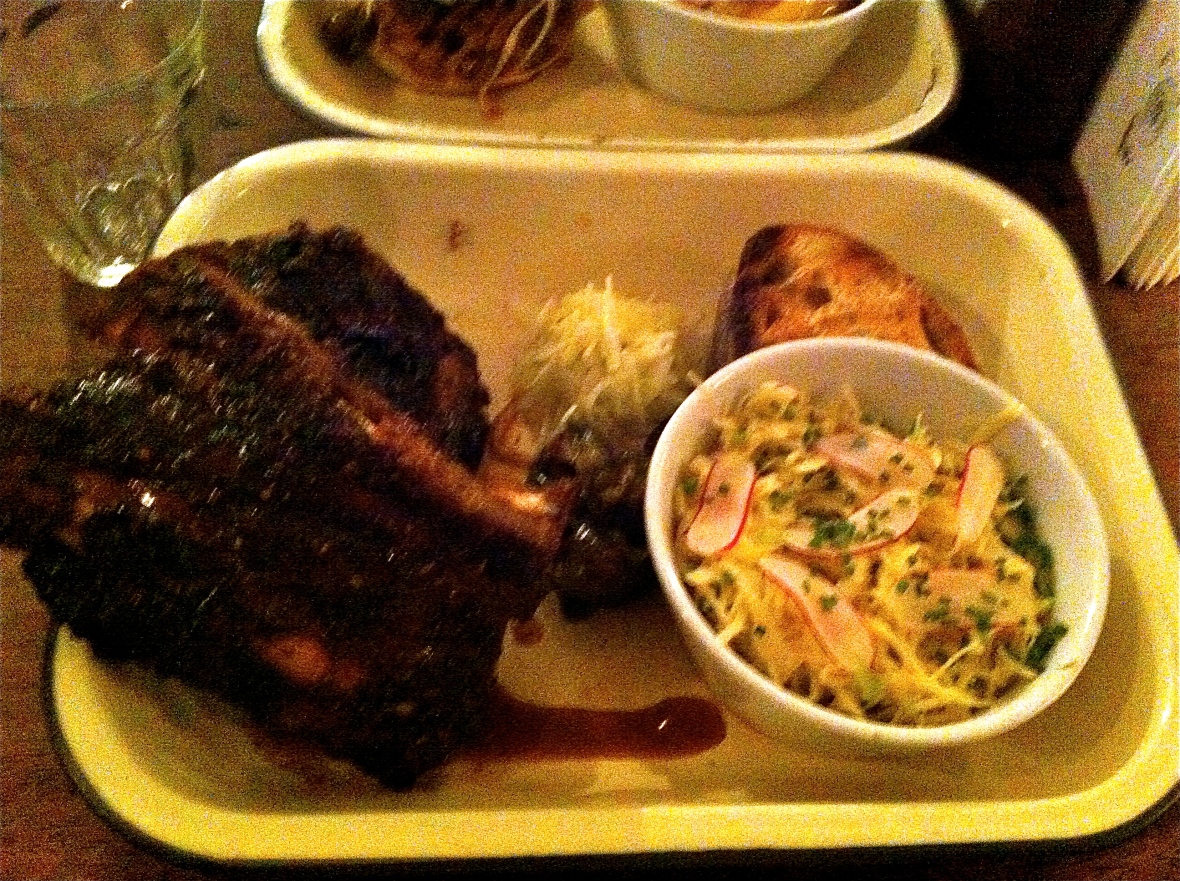 However, the pulled pork sandwich definitely didn’t disappoint and was made even more indulgent with the side of bone marrow mash. The bone marrow mash was rich, yet creamy – perfect consistency. 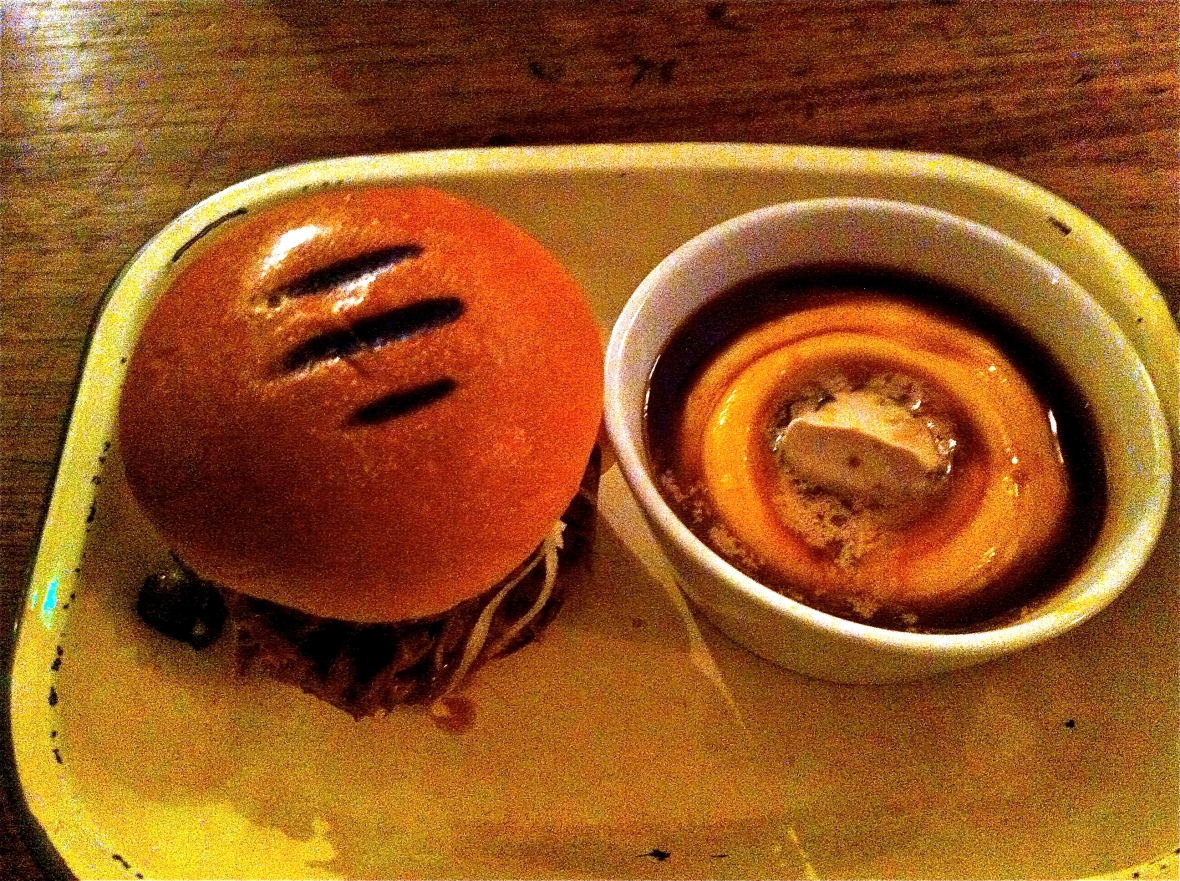 The green chili slaw was underwhelming as were the wings. The wings were a tad too sweet and sticky – if they had gone for buffalo wings I might have been more pleased. 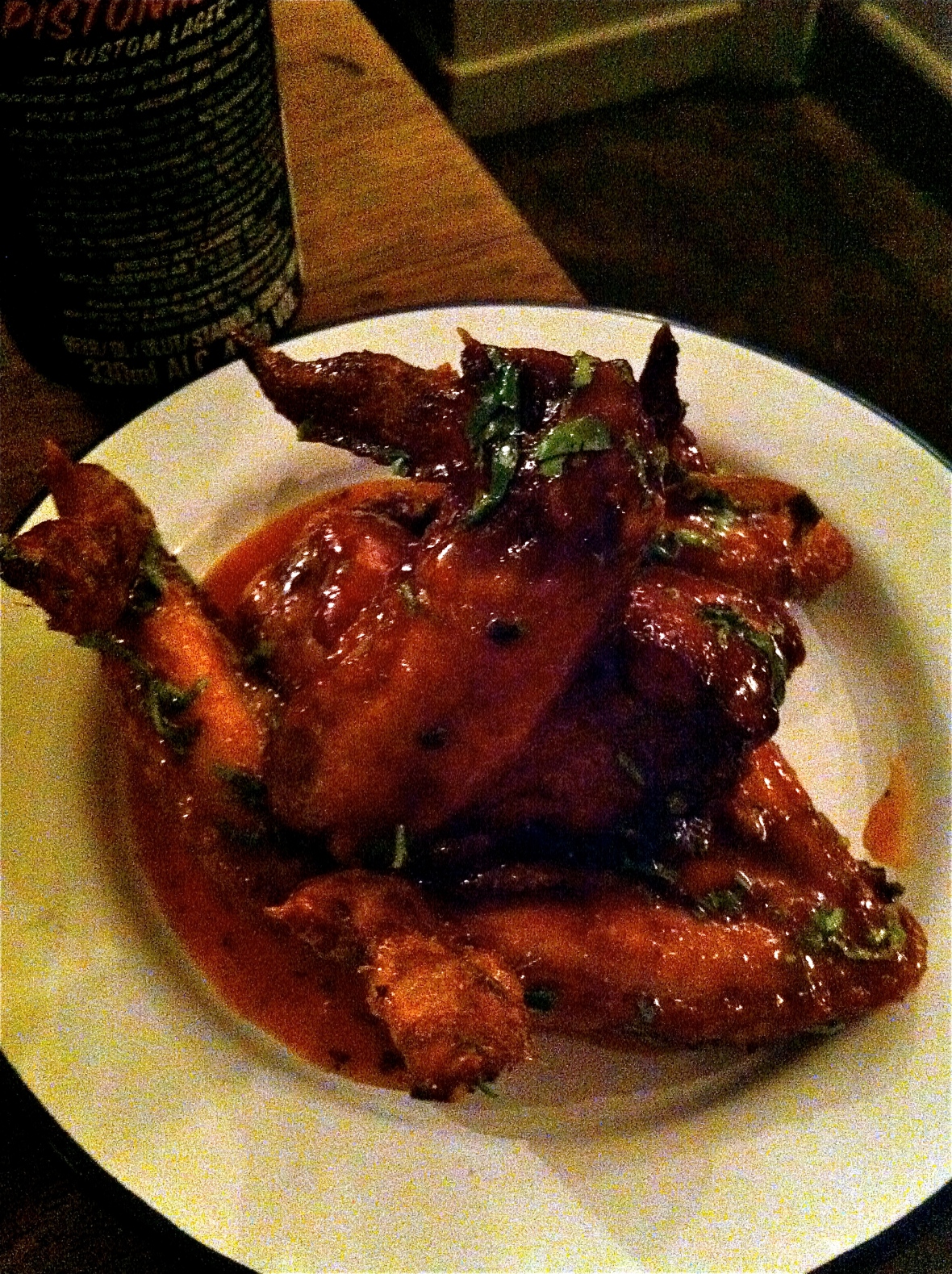 There has been a lot of hype around this place and it is doing well and will probably continue to do well. It would be wise and helpful if they put their menu on their website – just a thought. It would also be nice if they capitalized on their success and moved to a venue where their patrons didn’t have to be corralled like cattle in a basement to eat food. Oh yeah, and then maybe they could take reservations…