It’s April and I’m listening to Christmas carols, cooking stew and sipping hot chocolate. But this is justified because it’s snowing outside. The weather is grim, morale is low, payday isn’t for another 2 weeks. In times like these, sometimes one has to make a stew. It’s the only solution (second to maybe making baked macaroni and cheese or having a really strong JD and Coke).

This isn’t your average stew – it has a bit of kick which sometimes is just what you need in the middle of the week. Props to Nigella for this one. Also, Americans and Brits, you’ll be pleased to know that Nigella’s recipe has both imperial and metric measurements so you don’t have to convert them! Exciting.

Now would be a good time to point out the obvious fact that, I don’t really post many vegetarian recipes. Scratch that, I haven’t posted any vegetarian recipes. I promise I do have some up my sleeve that I will post but at heart I am a ‘chicken and rice’ ‘meat and potatoes’ kinda girl. And on that note, onto the chorizo stew… 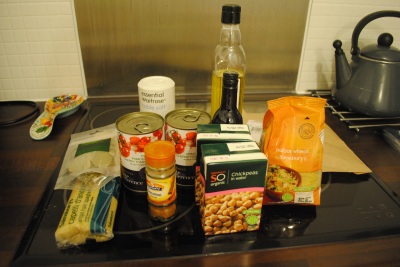 Warm the olive oil in a thick-bottomed pan on a medium heat.

Fry the pasta bits in the oil for a minute, stirring, until they look like slightly scorched straws.

Then add the bulgar wheat and stir for another minute or two. 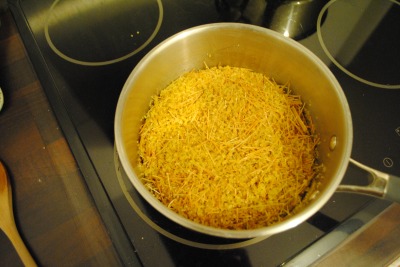 Stir in the cinnamon and the salt, and then pour the water into the pan. Add the bay leaves, and bring to a boil, then turn down to the lowest heat, add a lid, and leave for 15 minutes, until all the water has been absorbed. 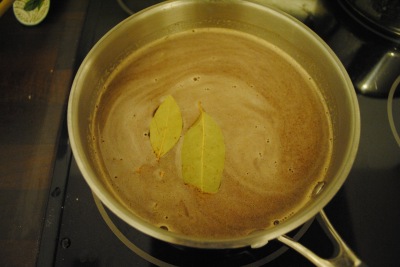 Put another thick-bottomed saucepan on a medium heat, add the chorizo pieces and fry until the orange oil runs out. Then add the sherry and let it bubble away. Add the apricots (if using), along with the chickpeas (or beans) and canned tomatoes, and half fill each empty tomato can with water and swill it out into the pan. Put on a high heat to bubble for about five minutes. Add salt and pepper to taste. 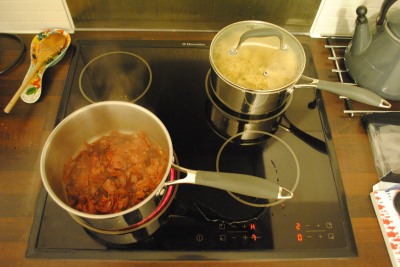 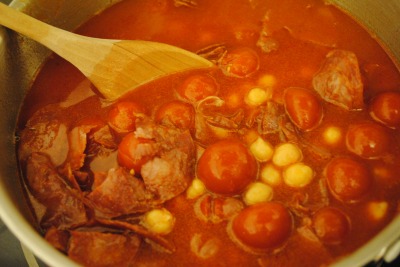 Serve with the bulgar wheat and, if you want, put some chopped coriander on top.  Gorge. 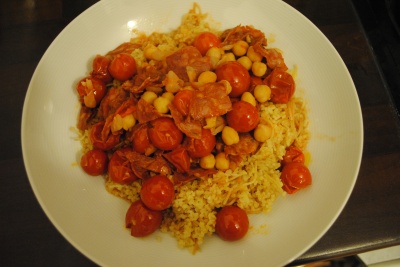 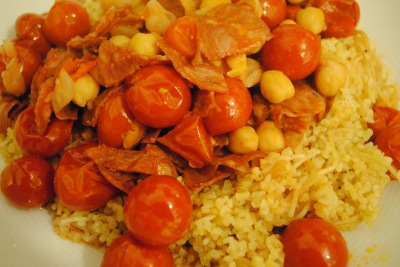 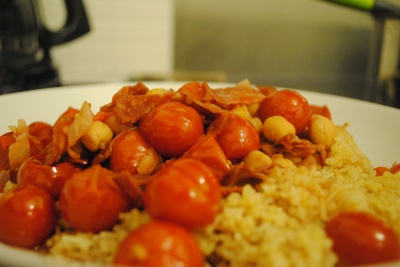 The stew can be made up to two days ahead. Transfer to non-metallic bowl to cool, then cover and refrigerate as soon as possible. Reheat gently in large saucepan, stirring occasionally, until piping hot.